In Rick's Piedmont Civic Association Oct 17, 2018 article he makes the following statements that I challenge or refute below. I copied and pasted his comments and have my own numbering. See his original article for additional context. 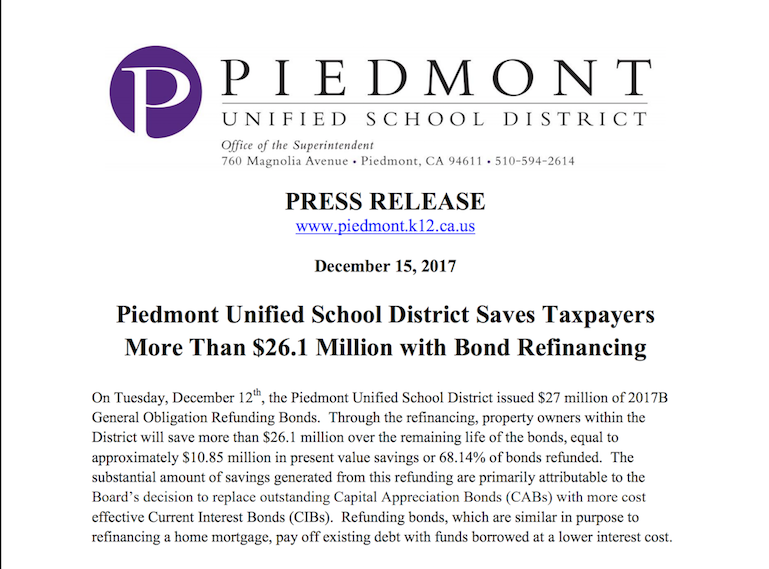 The December 15, 2017 bond refinance was very tricky in that the original 2013 bond had a 10-year no-refinance clause. The refinance required creating a parallel bond with a trigger mechanism to pay off the 2013 CAB in 2023.

Some of the savings from this refinance came from a change in interest rates but the bulk of it came from eliminating unpaid interest charges compounding from 2023 to 2043.

I obtained a PhD in Computer Science in 1993. After teaching a year in college I switched to working in Finance and Technology industries as a Data Scientist. Since 2013 I have followed the District’s bond funding options, and provided oversight with detailed comments in emails and Board meetings. My articles can be searched on my HariTitan.com website using keywords: AHT, STEM, Kindergarten or CAB.

Over the 4+ years of attending school board meetings regarding bond financing I discovered various ways in which CABs were misrepresented to the public.

I would like to congratulate the board in responding to the voices of the community who wrote into the board (roughly four years of lobbying later) to view the 2013 CAB negatively and allow for a refinance. However there are a number of issues relating to the process we went through that are troublesome.

Call me CAB for short. Just when you thought creative financing died years ago, it got resurrected over Halloween of 2017. Refinancing a CAB with yet another CAB was put on the table by our school district from an unsolicited bid by a bond underwriter. The same bond underwriter that financed the $12 million construction of Havens with a $64 million tax liability using a compounding interest CAB. I’m glad this CAB is the subject of refinancing but only with a current interest bond (CIB) not another CAB.

It also requires the bond amount(s), the interest rates, the life of the bonds and the first year of taxation for the CAB as inputs.

These inputs are in yellow.

In one of the reports KNN did for San Leandro, KNN stated a moratorium on CABs was issued to all School Districts in California:

On January 17, 2013, State Superintendent of Public Instruction Tom Torlakson and State Treasurer Bill Lockyer sent a letter to all school districts asking for a “moratorium” on issuing CABs until the Legislature and the Governor decide on reforms.